On being ‘just right’

There is a strange shift in respect and boundaries as soon as a woman becomes pregnant or at least as soon as she looks pregnant. I would go as far as saying there’s an outright disrespect of the pregnant woman and her body happening and it seems to just be the norm. Personal space vanishes and you become fair game because there’s another human growing inside you. Comments, groping, nothing is sacred. Sound like it doesn’t make sense? It doesn’t.

Everyone’s a bloody expert on your size and the general consensus is that you’re either way too big or way too small for wherever you are in the land of gestation. You’re rarely ‘just right’. And women seem to be the ones leading this field of so-called “expertise”, probably because they’ve either been pregnant themselves or simply because they’re women. If it sounds like I’m irritated it’s because I am. In fact, I’m pissed off.

During my first pregnancy I had just gotten to a place with my body image where I was comfortable in my own skin. Years of being told that I was too skinny, had too small boobs, had this or that wrong with me was finally starting to wear off largely because I was with a man who never, not once, made me feel as if I looked anything other than just right, he even made me feel beautiful and comfortable naked. That is no small feat after years of being told the opposite.

When we excitedly expected our first baby and morning sickness came to visit I was worried about my weight, but we didn’t own scales so it wasn’t until 12 weeks that I was weighed and found out I was 47 kgs. I freaked out. No one told me there was a problem, but in my head all those “too skinny”, “anorexic” ghosts came back in a big way. So I started eating. A lot. It didn’t help that the first 20 weeks were filled with fortnightly check ups to make sure my cervix was holding (it was very short) and I felt alone, shit scared and depressed. I was studying and so my days were largely spent at home, shuffling between the kitchen and the computer. We still didn’t own scales so there was no way for me to track my weight except through my Wii fit who promptly told me I was becoming overweight because there is no pregnancy setting on the damn thing. Needless to say I stopped using that. Being of a very tiny frame in the first place I quickly gained a bump which I adored more than anything.  Except when people groped it uninvited. Around 6 months I started hearing how big I was, that it had to be twins and all that. By that stage I looked like this:

This is me at 24+3 with Anakin. Too big? I wouldn’t say so. I kept eating. I grew out of my size 8 pants, but then again they were size 8, right? But I kept eating. Before that I also heard a lot of “you’ll be back to your normal size by the time you leave the hospital” “You’re so skinny in the first place it will all just vanish once the baby’s born” from people who knew me.  No pressure at all to lose all the pregnancy weight as soon as the placenta was born…  But then it got to a point where the comments went in another direction. And they were far from subtle or nice.

Yes, i did gain a massive amount of weight and in the process I started getting new issues about it all. No one wants to hear how huge they are. Would you go up to a plus size person and say “oh my, you’re so fat?” Why is it so different because you’re pregnant? And it was more or less constant, from strangers, from family… I mostly played along and even said it myself, but it was doing a number on me big time.

Once Anakin was born it took me ages to look anything like my regular self. The tummy didn’t go down fast and despite losing weight at what was probably a normal pace I had a long way to go. When Anakin was around 16 weeks I was just over 63 kgs, but still not looking anything like my old self. I had lost a huge amount, but my brain was so messed up from hearing how big I had been that all I saw was those extra kilos and my new mummy pouch.

Fast forward to this pregnancy. I had just started to come to terms with my new body shape and my slightly bigger size when we got pregnant again. I was 60 kgs and thought I looked ok, even normal. Long gone was the size 8 wardrobe, but I was ok with that. The bump got pretty bumpy pretty fast. Subsequent pregnancies will do that as your muscles aren’t what they used to be. My ghosts came back along with all the other drama that went down in those first weeks. Morning sickness was back with a vengeance, worse than the first time around. And as we got further along I heard myself saying things about my body that wasn’t nice at all and growing concerned about gaining weight again. And the closer we got to 20 weeks the more I started hearing how big I was. 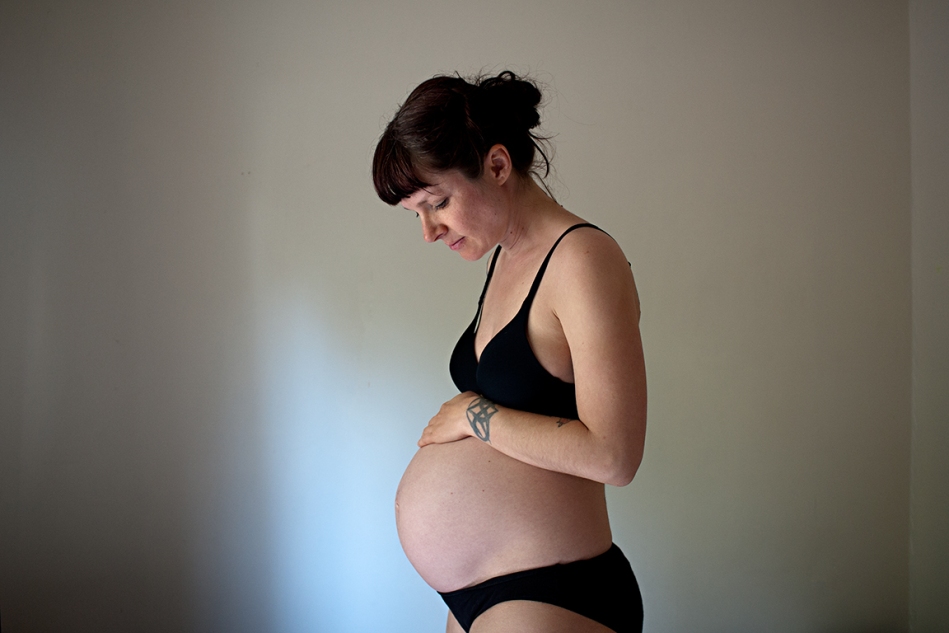 I met the lady who runs my prenatal gym classes after that assault of unwanted opinions, a slender, super fit mid twenties lady 30 weeks pregnant and who looks amazing. She’d just been told the same thing. There is nothing remotely huge about her. Nor is there about me. We’re just right. Different pregnancies, different bodies, different babies, different everything. No woman is the same, no pregnant body is the same. And I am so tired of fighting this war with my brain about gaining weight again because I am constantly told how big I am that I can’t help but repeat it myself. We’re supposed to get bigger, we’re growing humans! Our bodies are supposed to change! There is nothing wrong with a bigger bump!

Let us feel beautiful because frankly when I look at the above image I don’t see huge or big, I see beautiful. I see life, I see happiness. But I need images like these to feel that way because as soon as I have to get dressed in the morning I find myself concerned about wearing maternity dresses because they make me look bigger and it is fucked up! I dress in things that hug the bump rather than fall off it because I just don’t know how I’ll react to the next “big” comment I hear. It’s tiresome. And it’s maintaining this messed up body image that’s etched in my brain.

I take these photos so my daughter can see what I looked like carrying her. So that she can see what we looked like when we were two bodies in one, and I take them to give evidence to myself that I am just right. And to remind myself that my pregnancies are beautiful, that they look beautiful. A body in blossom, not a body gaining weight.

Luckily I still have that man who without fail makes me feel just right. I just wish the rest of the world would stop playing the experts and instead of calling a pregnant woman big, call her beautiful.

(Image taken from Hip to be Round – A Maternity Boutique)

Alternatively just shut the hell up.