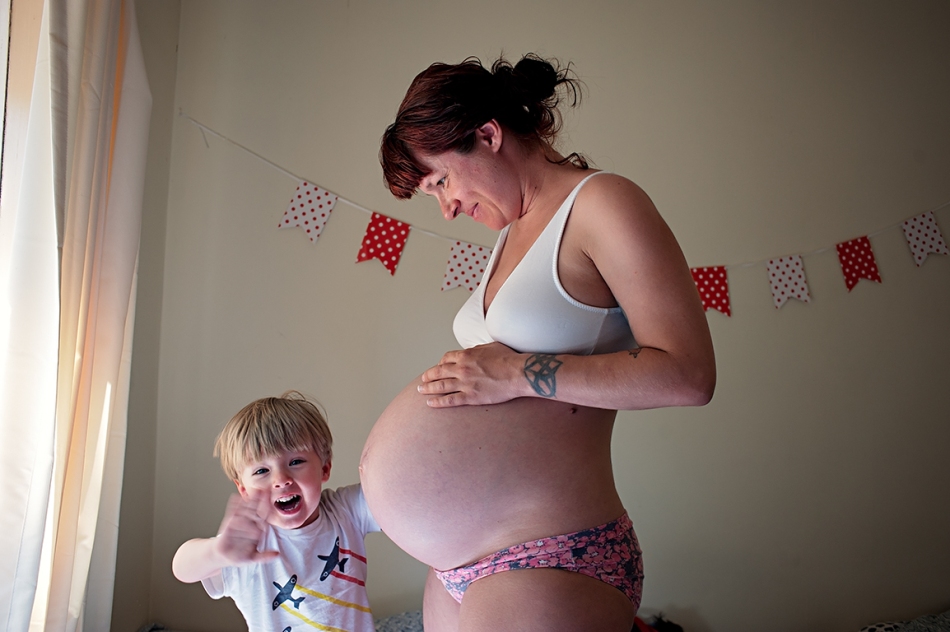 Thursday January 22, 38 weeks +6 days. She was still swimming on the inside. 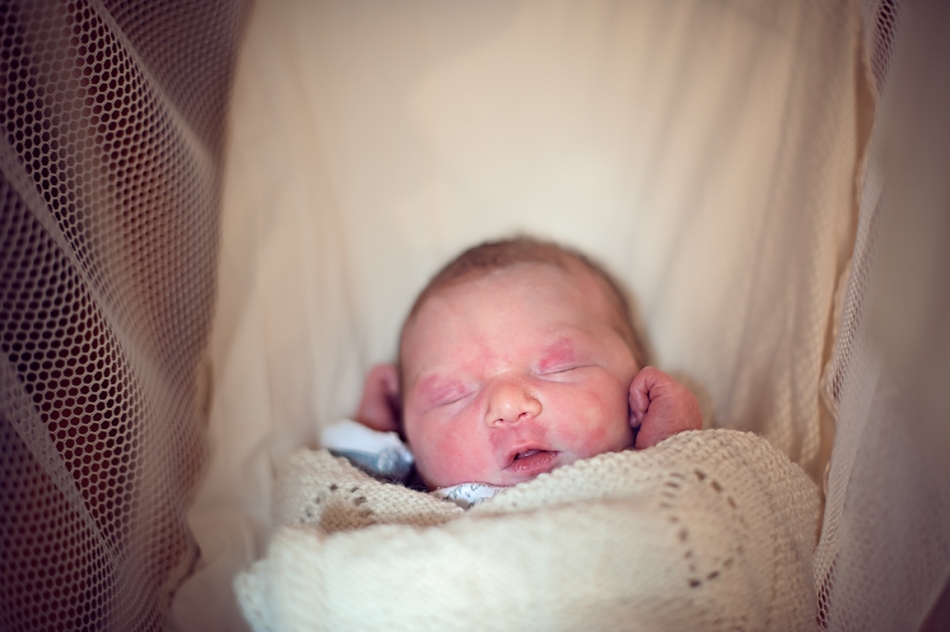 1 day old, having her first sleep in the hammock. 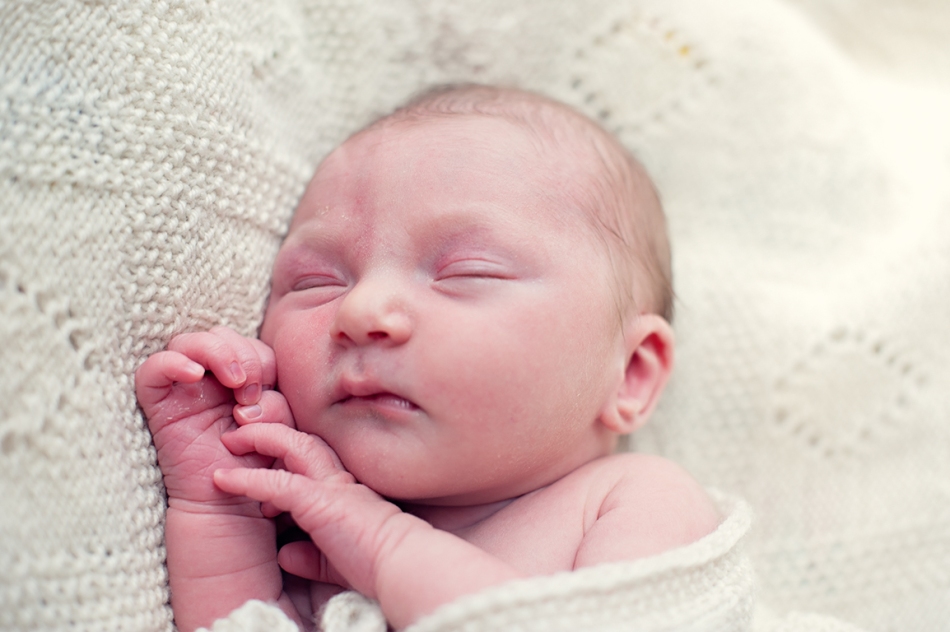 We’re still finding our feet as a foursome and I’ve still got some healing to do, but life is good. I’m still processing the events that brought our baby girl into the world but once I do I will write her birth story and share some photos. In the mean time we’ll be busy enjoying our new family and easing our way into this new life. Posting will still be erratic for a little while as we’re still navigating our way through the early days. My heart is still expanding, my head is still trying to catch up. All I know is that right now I couldn’t possibly be happier. Unless I had a really long sleep.

Anakin was born December 23, 2011, at 07.12 in the morning at The Royal Women’s Hospital in Melbourne, Australia. He was a beautiful little thing. Quiet. Petite. Everything we’d asked for. The labour wasn’t too bad considering things didn’t go to plan at all.

Waiting in the triage

I wanted an active labour and a natural birth. I wanted to stay at home as long as possible, even though our house was full of family visiting from overseas at the time. When I woke up around 6am December 22 I was excited, I had been looking forward to giving birth and I was ready. Nothing much happened for a while. There was a little bit of water, some blood. We went shopping for the last Christmas presents and got the car seat installed. It was hot and I was huge. I had put on over 30kg during my pregnancy. When it got to lunch time we decided to go home, I was getting uncomfortable and I needed to pee constantly. We ate and it dawned on me that I should probably give the hospital a ring and let them know what was going on. I had to come in to be checked out. So in case we had to stay we took our bags and all and left. I was not in very good mood at the time because I did not want to have to stay there.

Still able to touch those toes! 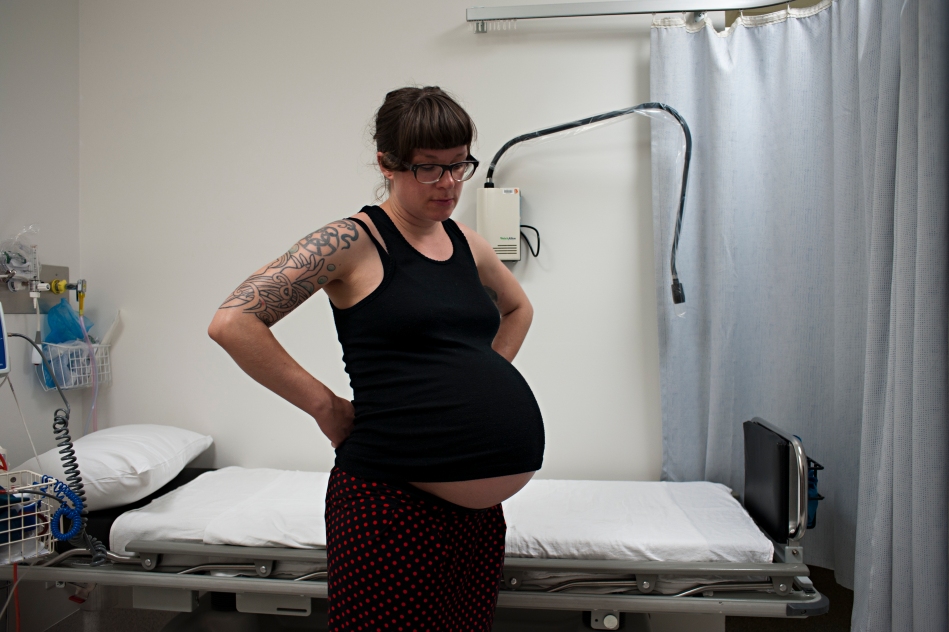 When we got to the hospital it took a while before anything happened. Apparently the word Blood makes people weary and they think all kinds of things is going on. We got a bed in the emergency ward and I was hooked up to some monitors.

Stuck in bed in the emergency ward

I didn’t want to be stuck in a bed at all. I had inflammations in my tailbone and pelvis, and lying down hurt. But I figured we’d be sent on our way soon enough. After getting an examination it started to become clear that may not be the case. There was a lot of old blood and I was told to wait for a doctor. After passing an alarmingly large blood clot in the bathroom even I started to realise that this would probably not go the way I wanted it to. We managed to get some food before we saw a doctor at around 6pm. After another examination I was told that at some point I had started bleeding (but it had stopped) and they were afraid the placenta may be coming loose so they wanted to induce as soon as possible. I was 1 cm dilated. I tried to convince them to let me go home, that I was already in labour so there was no point in inducing, but to no avail. I didn’t put up too big a fight because nothing was going to make me risk the health of my unborn child even if I thought they were making a big fuss.

So we were left waiting. They were busy so no rooms were available. They told me Steinar might have to go home if I was sent to another ward until there was a birth suite available and the thought of being left terrified me. Hours went by, we watched some tv shows. (American Horror story is an annoying thing to watch when in labour… I’m just saying.) My contractions were 5-7 minutes apart and everything was fine. My water broke in a big gush that made me jump up in bed. I was told I was being difficult for not lying still. I was annoyed, all I wanted to do was to move around as I felt things progress. Finally after midnight sometime someone came to take us upstairs. I asked to please be allowed to walk, but was firmly plonked down in a wheelchair and wheeled off. This was probably a good thing because on the way upstairs my labour kicked into high gear. We were taken to an assessment room as there were still no birth suites available. Steinar hooked up my TENS machine before getting our stuff from the car. 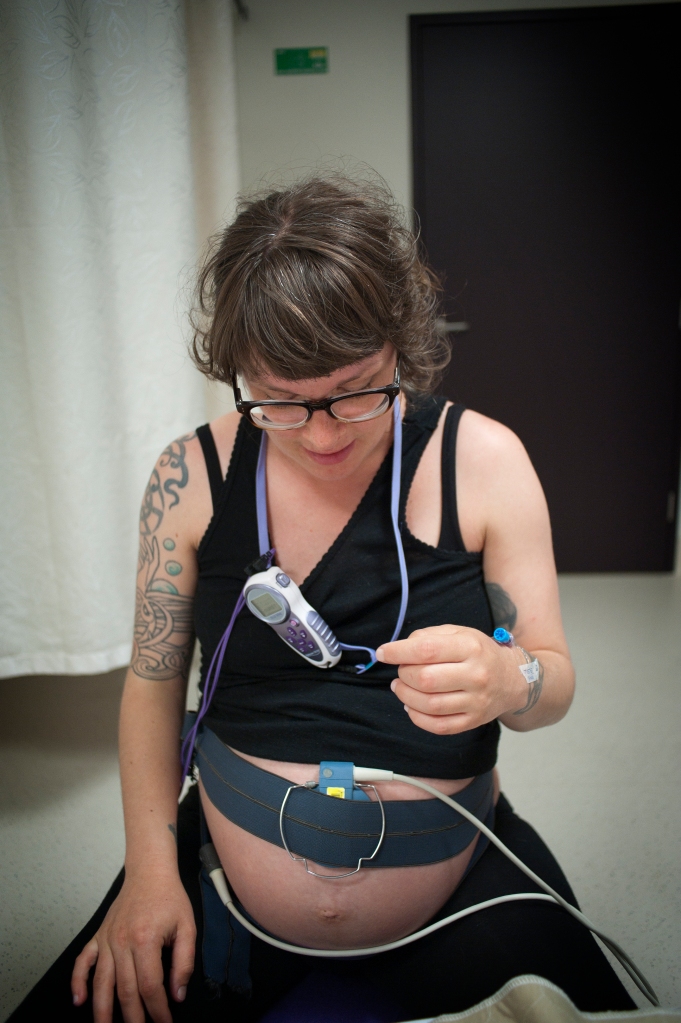 TENS, monitors and my arch nemesis, but still smiling

I was still at a point where I managed to have a few smiles and hold some sort of conversation. I sat on a birthing ball cursing the intravenous thing they put in my arm in case it was needed. It hurt and I made it my arch nemesis. I was still hooked up to monitors so my movements were restricted. Then things started to become a blur.

I held on to Steinar through the contractions, but they were so close together there was hardly any time to come up for air. He sat on the bed holding me tight as we went through one after the other, never complaining, never saying anything other than encouragements like “you’re doing great” and “I love you”. I remember going to the bathroom at one point where I made him run the water in the sink to help me pee. At one point I looked up at him after a pretty hardcore wave of contractions with tears in my eyes and said “Fuck that hurt”. He looked at me in amazement. It had taken me 23 hours since it all began to swear. And it only happened once. He tried to make me eat some muesli bars, but everything grew in my mouth and it was too hard to concentrate on eating.

Someone came in and checked me again at some point. I was 7cm. I vaguely remember the midwife popping in to see us every now and then. I was checked again, 9 cm and ready. I hated to be checked. As soon as they put me on my back the pain became close to unbearable. We tried sitting on all fours to push, but the baby’s heart rate dropped dramatically. We tried on the side, but the same thing happened. I was told I needed to be on my back with my feet in stirrups and for a moment I lost the plot completely, grabbed Steinar and tried to say something along the lines of “I can’t do this”. Except having to do a c-section this was close to my worst nightmare. I didn’t want to do it that way! As we started pushing a birth suite became available and we had to take a break to be wheeled in there.

They took my TENS machine (after flipping me over so I laid down on the dials and really boosted the thing) and suddenly the room was full of people. I heard words like “assisted birth”, “vacuum” and other things I did not want before vaguely making out a doctor looking at me. He gave me an hour to do it myself. So we started pushing. And every time I pushed both my legs would cramp up and I would scream. It took a while before I was able to explain that I was screaming because my legs were killing me, not because everything hurt beyond belief (which it did). I was exhausted, thirsty and just out of it. At one point my body gave up. Everything stopped hurting, I couldn’t feel a single contraction anymore and all I wanted to do was sleep. I kept telling Steinar I couldn’t do this anymore, I needed to rest. After 10 minutes of no action the midwives began to get anxious. I asked them to tell me when to push because I couldn’t feel anything anymore. Someone offered me some gas to which I said yes, but it never appeared so I went without. (Steinar later told me they put it next to me, but it fell on the floor, so when I didn’t ask for it he left it, respecting my wishes of not wanting to be offered anything unless I asked.)

When I was told we needed to get the baby out as soon as possible and they had to help me with vacuum I was more than happy to accept. I had nothing left in me. They gave me an episiotomy and with a few more good pushes our baby boy was out. He was whisked away and it took a minute or two before I finally heard him. He was brought back to us and Steinar cut the cord. It turned out our little acrobat had tied a true knot on his umbilical cord and this was what was causing his heart rate to drop. With only about five hours of active labour it was a quick, but exhausting one. 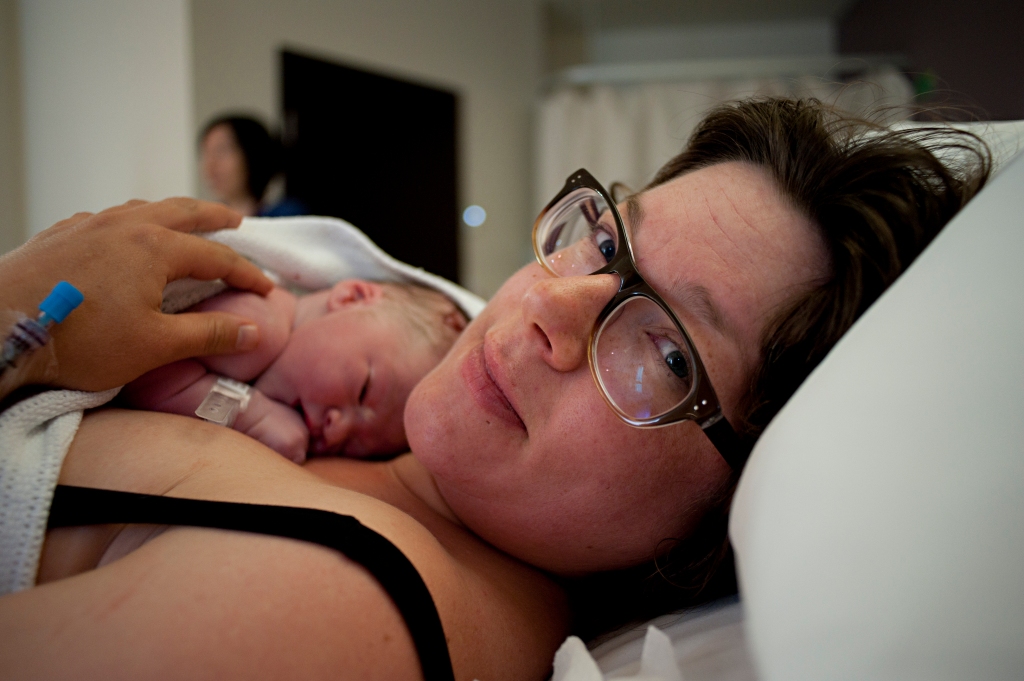 They put our baby on my chest and I was filled with this amazing calm and unconditional love for this tiny being I had only just met. I got to choose his name, and I chose Anakin. (It was either going to be Hunter or Anakin.) I was prouder than I have ever been, proud of myself for doing it without pain relief, proud of Steinar for being an amazing support and believing in me, and proud of our little cone head. 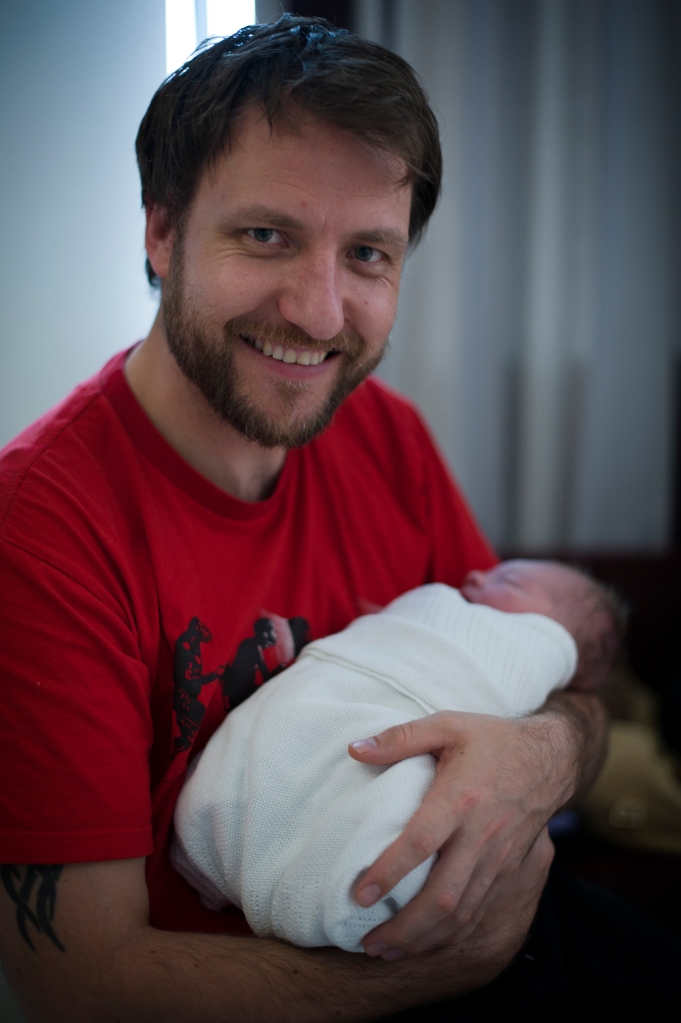 A few hours later we were taken to a single room with a big double bed. We laid there in a happy, exhausted haze until Steinar had to go home for the night.

The next day we went home to celebrate christmas with our family. I had hardly slept since it all started. We were in a daze of happiness.

This was by far the most amazing experience I have ever had. And I would definitely do it again. If we ever have a second child I will look forward to doing it all over again. No fear, no hesitation, just pure joy.

All packed and ready to go