Tips for traveling with a toddler… long distance… by air

It’s a long way from Melbourne to Oslo, Norway. We were on “the go” for about 35 hours each way. From Melbourne we went to Dubai, then onto Frankfurt and Oslo. In Dubai we had a good 3,5 hours in transit and in Frankfurt about 5. We thought we had the same route back, but to our surprise (and my great annoyance), they threw in a stop in Kuala Lumpur for about an hour. It’s the first time we’ve traveled on a plane with Anakin, and it was also the first time my partner and I have traveled by air together (in 8 years!!! And we’re from the same damn country!). I’m no expert on the subject of traveling with a toddler obviously, but I thought I’d share with you a few things that made our lives easier along the way.

Anakin will eat mostly anything, but because he is under two and therefore travels as an infant, they only supplied a tiny glass of puree. Think first foods type. It was ridiculous. The boy is 19 months old, he is far beyond puree and definitely needs more than a tiny glass per meal. Along with that he got apple juice and chocolate custard. Not a great meal in any case. On the way over I had thankfully made muesli bars and brought other snacks. But because of this we ended up sharing our food with him and every stop we had we made sure we all ate properly. 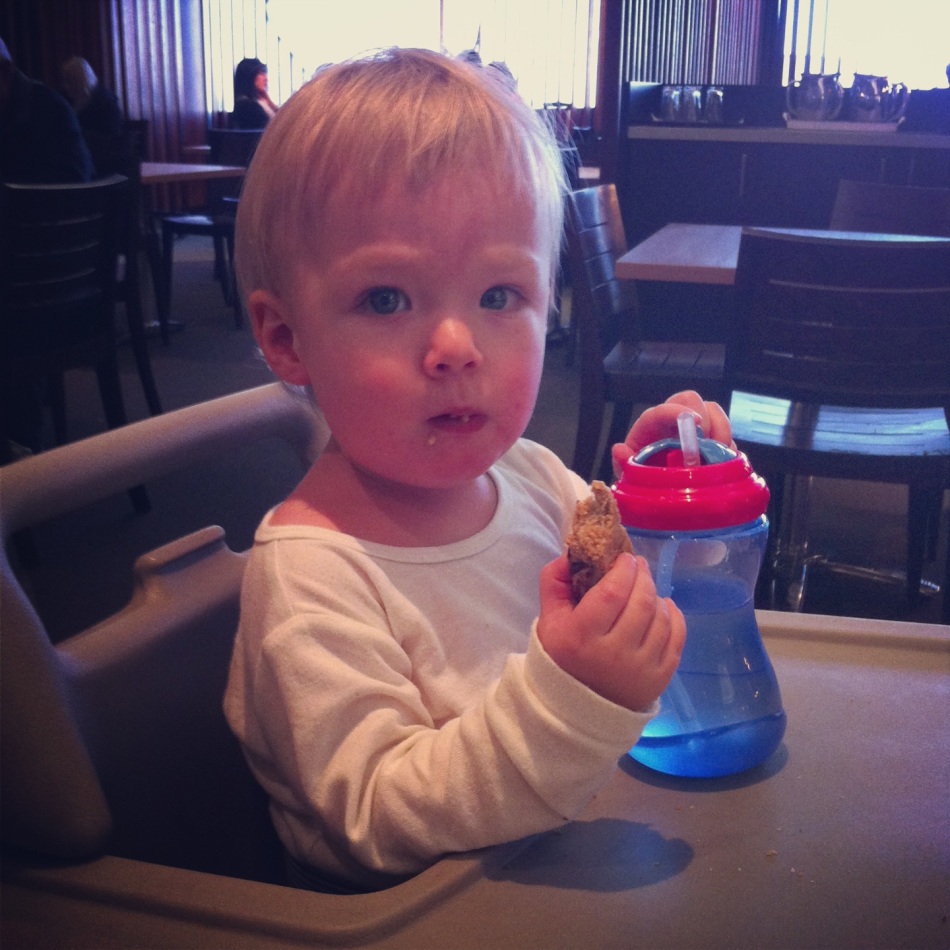 Eating in-between flights was a must for us

2. Whenever possible, let your kid run!

Toddlers have a lot of energy. Where they get it from I’m not sure, but you’ll want to let them release as much of it as possible whenever the possibility arises. If your choice is between putting your kid down for nap or letting them run while in transit, I say let them run. Sure, they’ll be overtired and that’s not ideal, but a kid that’s been cooped up for too long is worse. There’s limited space to move on the plane and too much sitting still as there is. Some airports have play areas. Ask someone if you can’t find it. Let them run!

3. Bring a carrier if you have one

I will never ever go anywhere ever again without a carrier. We use the Tula toddler carrier and I swear it saved us from so much hassle. It can be used on the front and on the back. Anakin sits really well in it, it supports him all the way out to the knees, and best of all it’s easy on my back. I have a chronic back injury so being able to carry Anakin for longer periods without any discomfort is pretty amazing. There are quite a few places in airports where it is easier to carry your kid than have them in a stroller or walking. We didn’t bring a stroller at all for this trip and I’m very glad we didn’t. The carrier also meant I could carry Anakin all the way to our seat in the plane.

In Dubai on our way to Norway Anakin was flying high, way overdue for a sleep and I was able to put him in the Tula, calm him and put him to sleep with ease. During a rather ugly meltdown on the way back the Tula once again became a lifesaver. Anakin lost the plot on the plane, there was no getting through to him at all. After 15 minutes of screaming at the top of his lungs, thrashing about and every effort failing, my last resort was to put him in the Tula. Within a minute he was calm and within five he was asleep. At that time I ignored the seatbelt sign and being told to sit down by the crew. I also ignored the urge to lash out at the people shooshing him and especially the lady who came up asking us to ask the crew if there was a doctor on the plane who could help. Seriously, lady, don’t for a moment think we don’t know the difference between our son needing a doctor and just being far too overtired going in to the 20-something hour of traveling. Once again, the Tula was a lifesaver. I can not recommend this brand of carrier enough!

We packed a little backpack which had a nappy clutch, food, a sippy bottle, some books, a happy snap and some toys in it for easy access on the plane. We brought some old favourites and some new things that would have a bit novelty. We kept it small and as smart as we could. A couple of books, some crayons and a notebook, some toy planes, a plush tiger, an old Nokia phone and a few small cars.

Before we left I found some small Winnie the Pooh pop up books that I picked up for Anakin for the trip. They proved to be really good. As did a book about animals with some small flaps Anakin could open. I used these mostly during take off when Anakin needed to sit still on my lap something he wasn’t all that happy to do without distractions. 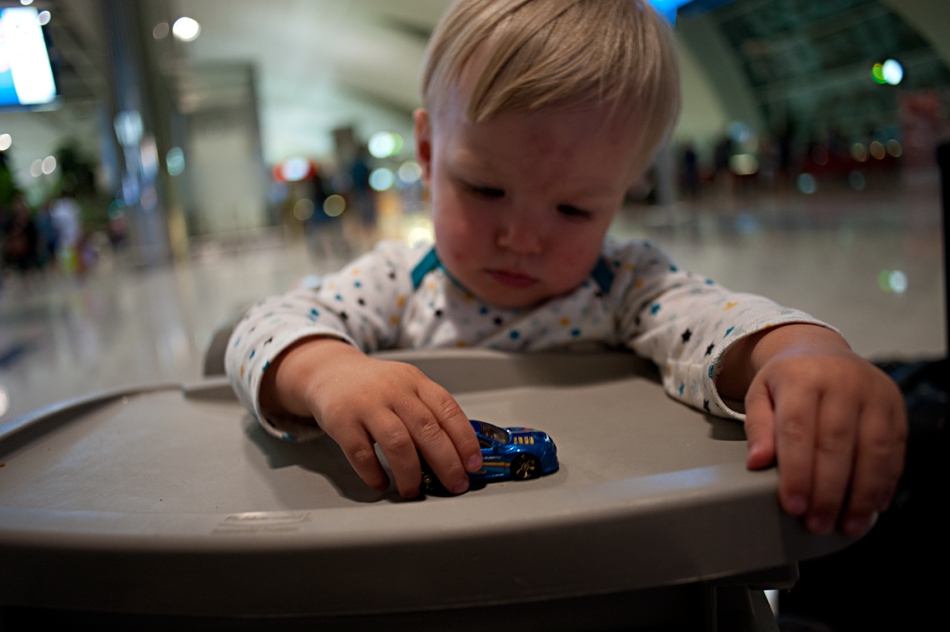 5. Help your kid reduce pressure on the ears during take off and landing

It’s easier for us who can just pop our ears ourselves, but even so it’s pretty uncomfortable. I’ve always thought the descent was worse than the take off. For Anakin we tried to have a bottle of water with a straw and some chewy snacks like muesli bars or sultanas on hand for the take off. Sucking or chewing helps ease the pressure on the ears. If you breastfeed, pop ’em on the boob, or if they take a dummy, give them that. For the descent Anakin would prefer to breastfeed and would seek it out as the pressure got too much for him. Breastfeeding also kept him calmer and would more than often put him to sleep (leaving me as a human dummy.) Whatever works!

6. Bring extra (comfy) clothes for your kid, some slippers and an extra top for yourself.

You never know when an accident will happen and I know I’d hate to travel for a long time wet. We brought two pyjamas and an extra long sleeve bodysuit for Anakin next to the clothes he was wearing. We kept it light and soft. We also brought his growbag for when it was time for sleep. Anakin’s feet swelled a bit just like ours, so we kept him in slippers for most of the trip. We have little socks that have a slipper base on them, they’re fantastic.

On the last stretch before we get to Norway

7. If traveling with a partner, lean on them and take shifts

I’m cursed with not being able to sleep on planes. Anakin was very dependent on me for the journey, but whenever possible my partner would take Anakin for a bit so I could get some rest. Even five or ten minutes works wonders. During our flight to Frankfurt we were blessed with stewardesses who loved Anakin and would come by and play with him for a few minutes whenever they could. We were so grateful for the break. This wasn’t the case on any of the other stretches unfortunately. We would also take turns eating. Ask them to hold one meal and then swap once one of you has finished.

8. Most importantly: Don’t expect too much and roll with the punches

Kind of self-explanatory, I guess. We gave up on expecting Anakin to sleep when he normally does immediately. He was just a bit too big for the bassinet and was less comfortable sleeping for longer periods on our laps. I’d advise to bring a pillow to put underneath them when they sleep. It evens everything out and if you’re stuck in seats where the armrest doesn’t come up like we were, it makes it a bit more comfortable for them to sleep. And less hot as it puts a layer between you and them. 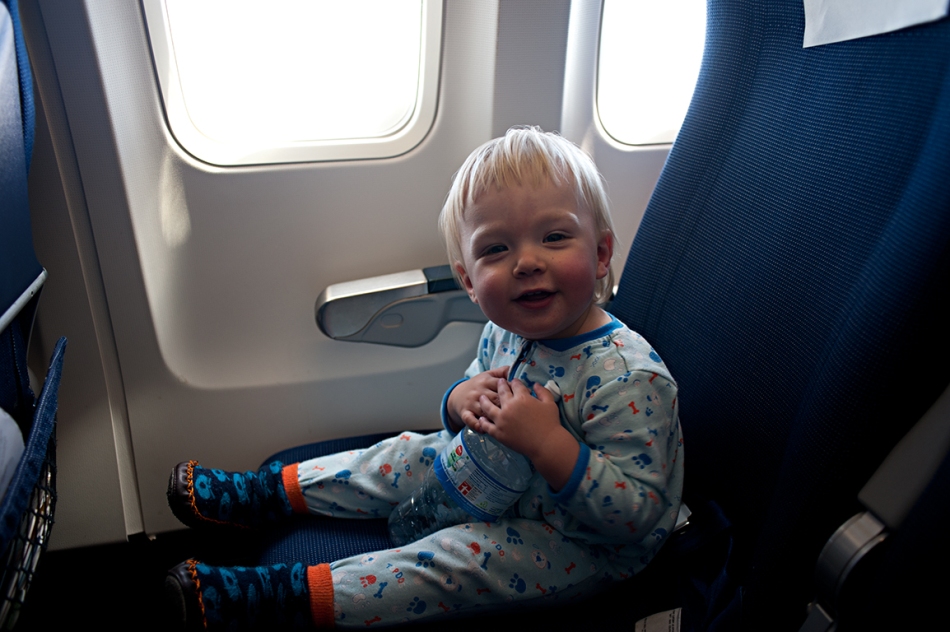 Captain Extremely Tired on the way from Frankfurt to Oslo

The journey is full of new sights and sounds and of course they’ll want to take as much if it in as possible. Just go with it and know that if (or when) the shit hits the fan, be it in an airport, a security check point or on a plane, you’ll get to where you’re going eventually. Breathe, count to ten and know that most parents around will understand what you’re going through.

That’s all I can think of in my hazy jet lag, but if you want to add anything, please feel free to do so in the comments!

All in all, Anakin did great, well above any expectations, but I’d be lying if I said I wanted to do it all again any time soon. 🙂

This entry was posted on July 25, 2013 by Dida. It was filed under Family life and was tagged with babywearing, Family, motherhood, Parenting, tips, toddler, Traveling, Tula.